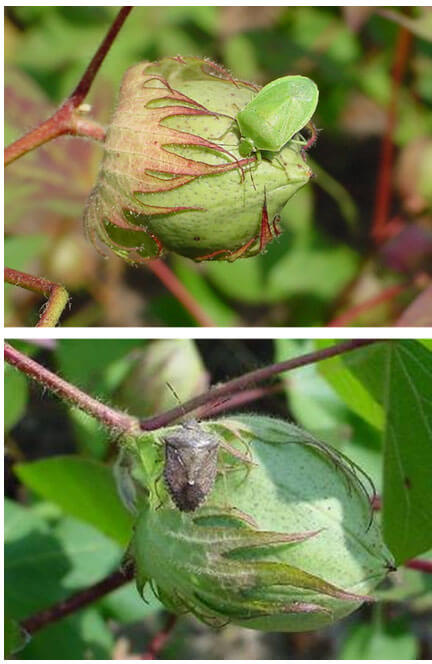 Stink bugs are the most common insect pest requiring insecticide control in Georgia cotton.  Historically, growers average about 2 insecticide applications per year.  It is critically important that all fields are scouted for stink bugs and insecticides are only applied when thresholds are exceeded.  Stink bug insecticides are broad spectrum and will significantly reduce beneficial insects which increases our risk of having problems with other pests such as whiteflies and corn earworm.  Stink bug populations appear to be high based on infestations in field corn.  I recently put up sweet corn and was alarmed by the number of stink bug damaged kernels.

Southern green stink bug and brown stink bug are the most common species in the boll feeding complex.  Other boll feeding insect pests include leaf footed bugs, clouded plant bug, and tarnished plant bug.  Stink bugs have piercing sucking mouthparts and feed on developing seed in bolls.  If the seed is damaged lint produced on that seed will be negatively impacted which reduces yield and quality.  During feeding stink bugs inject enzymes to dissolve plant tissues so the bug can suck them out.  In addition to this physical damage from stink bug feeding, and perhaps more importantly, stink bugs may introduce boll rot pathogens or at a minimum create a wound for boll rot pathogens to enter injured bolls resulting in one or more locules rotting which can cause serious yield loss.  Bolls which have been fed on by stink bugs may show small sunken purplish lesions on the outer surface.  However, this is not a reliable indicator of stink bug feeding as sometimes the lesion will not appear and sometimes when the lesion appears the stink bug did not penetrate the boll wall.  Internal symptoms of injury are a much better indicator of stink bug feeding and include stained or yellowish lint and/or callous growths or warts on the inner surface of the boll wall where the stink bug penetrated the boll (Figure 1).  The wart or callous growth on the inner surface of the boll wall will form within 48 hrs. on developing bolls.  As bolls mature and open, damage often appears as matted or tight locks with localized discoloration that will not fluff.  Severely damaged bolls may not open at all.

Bolls the diameter of a quarter should be sampled for stink bug injury.  Callous growths or warts on the inner boll wall and/or staining is indicative of stink bug feeding.  The inner boll walls of bolls which have not been fed on by stink bugs will be smooth and white.

Scouting for stink should be a priority as cotton begins to bloom.  Scouts should be observant for stink bugs (both nymphs and adults) when walking fields and checking for other pests.  Keep track on what species is most common, brown or southern green.  Immature southern green stink bug will have bright coloring, yellow of white patches on the abdomen.  Whereas brown stink bug nymphs will be yellowish to brown with no bright coloration.  Estimating bolls which have been fed upon by stink bugs is the best way to scout stink bugs.  Ideally, we would like to sample 1 boll per acre (i.e. 40 bolls on a 40-acre field).  Bolls which are the diameter of a quarter (about 12 days of age) are the preferred size to sample.  Bolls of this size are preferred compared with smaller and larger bolls.  Bolls of this size can be easily squashed between your fore finger and thumb.  After bursting the bolls peel the boll wall and look for stained lint and/or callous growths on the inner surface of the boll wall (Figure 1).  A percentage of bolls with feeding injury should be calculated.  It is also important that we do not sample bolls which are too large for two reasons.  Most importantly, if older bolls are sampled we do not know when that boll was damaged, perhaps 7-10 days ago, which can confound evaluation of previous insecticide applications.  And secondly bolls which are too large will be very difficult to burst.  During the first 10 days of bloom bolls will not be the preferred size to sample, so sample the largest bolls available.  If stink bugs feed on small bolls they will be jelly-like inside and will be shed by the plant.

The number of bolls on a plant which are susceptible to stink bugs is not constant and varies by week of bloom.  Bolls are relatively safe from stink bugs once they are 25 days of age.  The greatest number of susceptible bolls on a plant are present during the 3rd, 4th, and 5th weeks of bloom.  During early bloom there are relatively few bolls on a plant and during late bloom some bolls are mature enough to no longer be susceptible.  For that reason, we recommend a dynamic threshold which varies by week of bloom. Use a 10-15% boll injury threshold during weeks 3-5 of bloom (numerous susceptible bolls present), 20% during weeks 2 and 6, and 30%(+) during weeks 7(+) of bloom (fewer susceptible bolls present).  Environmental factors such as drought and/or other plant stresses may cause susceptible boll distribution to vary when normal crop growth and development is impacted; thresholds should be adjusted accordingly.  Detection of 1 stink bug per 6 feet of row using a drop cloth would also justify treatment.  Excessive stink bug damage will reduce fiber quality measures such as length and color grade.